If you want to live during your student years in a comfortable, calm, not noisy and at the same time colorful and rich on the sightseeing places city, then welcome to Vinnitsa. This ancient city is located on the picturesque banks of the Southern Bug. The city’s area is 60 km2. Population – 390 thousand people. 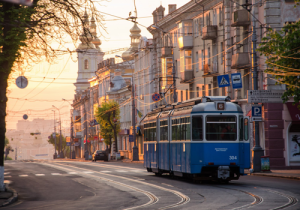 1362 is the year of Vinnitsa’s foundation. Thanks to the convenient location Vinnitsa has been quickly developed and grown, and in the XV century received the official status of the city. It is not surprising that the city appeared in ancient times as the nature itself contributed to the development of settlements in these areas. Thick forests, deep rivers and gentle, favorable climate attracted different people all the times.

Today Vinnitsa is a cozy city that attracts with true hospitality, cordiality and warmth of the local population’s attitude.

The sightseeing places of the city will show you a rich and interesting history of this ancient region. In the city’s center the oldest preserved architectural monuments can be found. 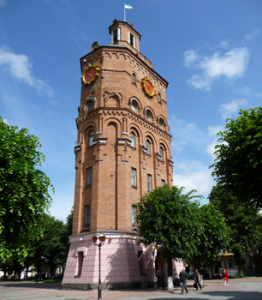 Along the Sobornaya Street the only defensive structure built in the middle of the XIV century and saved till our times – Jesuit monastery is located. The famous point of interest of Vinnitsa is the Museum-Estate of the outstanding surgeon and a great scientist Pirogov.

Nicholas church, a masterpiece of wooden architecture is located in the so-called Old Town. Also among interesting places there are Orthodox Transfiguration Monastery, Church of the Blessed Virgin Mary and others.

In this city the Sadowski Music and Drama Theatre, Regional Philharmony, the Puppet Theater, cinemas, libraries work and give people unforgettable emotions and impressions.

During warm months the favorite place for holidays of local people and guests of Vinnitsa are the banks of beautiful Southern Bug River. Also Vinnitsa residents love to relax in the green parts of the city – parks and squares.

The largest in Europe floating light and music fountain “Roshen” was opened in 2011 in Vinnitsa on the waterfront opposite the Festival Island, next to the chocolate factory Roshen. Vinnitsa fountain is considered to be a unique hydraulic structure. Night shows of water, light and music take place during the warm season (from late April to late October) every night.

Vinnitsa is a city of students. Young people arrive here to get education in technical, medical, pedagogical, agricultural state universities. One of the best Ukrainian medical universities is located in Vinnitsa – Pirogov Memorial Medical University. It is well known all over the world by the high level of teaching and attracts thousands of international students each year.

Vinnitsa has a excellent location and transport system and it takes just 4 hours by train to get to Kiev, the capital of Ukraine. Also Odessa is not far, so during warm months students can visit the seaside of the Black Sea and get a wonderful rest on the beach. If the one loves mountains and skiing it is possible to visit Carpathian Mountains in winter time.

TTGE invites you to study in Vinnitsa! We are sure that this city is a wonderful place for the students’ years and you will not only receive good knowledge and become a high level specialist here but Vinnitsa will stay in your heart for all your life!