TTGE invites all young people to study medical specialties in Danylo Halytsky Lviv National Medical University, which is today one of the oldest (226 years) and the largest higher medical educational institutions of Ukraine.

anylo Halytsky Lviv National Medical University is staffed by about 1,200 researchers and teachers, including 108 professors. 27 academicians, 7 members of the Academy of the different levels and specializations are the real pride of LNMU. The youngest generation of scientists of the university includes about 300 competitors for scientific degrees candidate and doctor of sciences, about 550 members of the Scientific Society of Students.

Lviv National Medical University was defined as the basic educational institution in the Western part of Ukraine on the implementation of changes of the educational processes according to the Bologna Declaration. International university’s activity is directed to joining the world health and education areas for exploration and implementation of the university’s research achievements. The university actively works with different medical organizations in Western Europe, India, Malaysia, Pakistan, Peru, Middle East countries and others. The scientists of the university implement their research works at the leading educational and scientific medical institutions in Poland, Germany, France, Hungary, USA, Australia, Canada,
Sweden, Belgium.

Nowadays about 5150 students are receiving higher education at the Lviv National Medical University. Teaching of international students started in 1960. Since then, more than 2,000 citizens of Europe, Asia, Africa and America have been educated at LNMU and successfully work in medical sphere in many countries. 330 of foreigners have graduated from the post graduate department of the university and 70 became professors. The university’s graduates who now live and work abroad, demonstrate high level of knowledge and of professional training they received in Lviv and as a result it leads to the growth of interest to the university from international applicants. Improvement of the hostels conditions and good infrastructure of the city contribute to it as well. 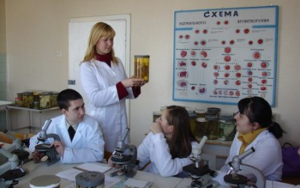 LNMU is also a very modern university with a strong material and technical facilities. There are 14 academic campuses, 40 clinical bases, educational and industrial pharmacy, the students’ dental clinic. Clinical Departments of the Lviv National Medical University where students gain practical experience are located in the hospitals, clinics and medical centers of Lviv. The departments are equiped with all needed modern medical and diagnostic machines. Also Lviv National Medical University has several computer classes with Internet access. The construction of the new campus of the University’s Dental clinic was finished recently and now it is being equipped by new medical facilities. The library of the university has more than 530 thousand books of medical literature as well as modern computer equipment. 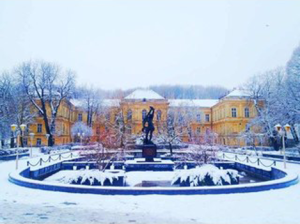 There are the following faculties at the university: medical, dental, pharmaceutical, preparatory, postgraduate. Except that there is the Institute of Clinical Pathology, Central Research Laboratory and the Laboratory of Industrial Toxicology, Research Center tor testing of new anticancer medicines, Scientific and Research center of biological psychiatry. In order to make the medical services to the patients on the level of the Western Europe and the North America standards, it was established the Department of Clinical Pharmacy, Pharmacotherapy and Medical Standardization at the University.

The teaching of the main specialties – medicine, dentistry and pharmacy for international students is carried out in Ukrainian, English and Russian languages. Studying in English was implemented in 1998 and from then reached a very good level. Around 200 persons study in English at the university nowadays. Students who start from the preparatory department learn the Ukrainian language and the basic subjects for further education  – biology, chemistry and physics. After graduation from the preparatory department students receive state certificates and can continue studying at the first year in Ukrainian or in English languages at the Lviv National Medical University or at any other medical university in Ukraine.

The university starts new educational year on the 1st of September. Students who plan to join the 1st year of studying should arrive before this date. The preparatory department admission lasts till the 15th of November. We recommend to contact us and fill Apply now form in advance.

LNMU is a good choice of the university for studying medical specialties, TTGE recommends it and invites to join!